Item # SFAG211VS
The Bronze Julius Caesar Roman Sword with Scabbrad by Art Gladius of Toledo Spain
Replica. Julius Caesar (101 BC – 44 BC) was the greatest military and political leader of ancient Rome. During his lifetime the frontiers of the Roman Empire were pushed forward and secured. Rome was transformed from a republic into a government with a single ruler, and Caesar was its first dictator. Julius Caesar wrote some the finest works of history in Latin describing the campaigns he fought in Gaul and elsewhere. Julius Caesar was an architect, a mathematician and one of the ancient’s world orators.There is no doubt that Caesar was ambitious and that he enjoyed the great power placed in his hands. This was given as one of the reasons for his murder at the hands of Brutus and Cassius.

The Roman Julius Caesar Sword by Gladius of Toledo Spain is a Roman Gladius or short sword of the Legions. From the pommel, which features the Roman god Jupiter protecting the Roman camp through to the blade which is finely etched on both sides, and shaped in the distinctive broad pointed Gladius style favored by centurions and soldiers of the line, this authentic reproduction is a sword worthy of the men of the worlds first great military empire. 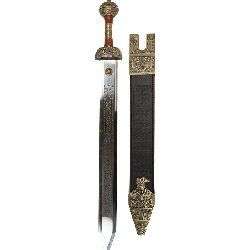 You're viewing: Bronze Julius Caesar Roman Sword with Scabbrad by Art Gladius of Toledo Spain $319.99
Rated 0 out of 5
Add to cart