The Emperor Charlemagne Sword by Marto of Toledo Spain is a replica of one of the most well known swords in the world, the traditional coronation sword of France, once attributed to the great Emperor Charlemagne. The original is kept in the Louvre Museum, in Paris, France. To this day, it is unclear whether the sword is Charlemagne’s sword “Joyeuse” or if it is of a later date, between the 12th and 13th century as more probably it dates back to. The Emperor Charlemagne Sword by Marto of Toledo Spain has a stainless steel made blade with a 24K Gold plated hilt, ornamented with figures in relief.
Charlemagne, Charles the Great, King of Franks, and Emperor of Western Europe, was born in 742 A.D., and became a famous commander in one of the great centers of power in history: The Sacred Roman Empire. Charlemagne’s empire was based on the fighting strength of the Franks, a confederation of barbarian tribes from the land of the Rhine in German. They fulfilled the emptiness of power after the fall of the Roman Empire. Their insatiable ambition, sometimes increased due to the goal of extending Christendom, led them to France, Germany, Italy and many other territories. An aggressive conqueror, wise politician, statesman, and fortunate General, Charlemagne set the shape of the vast empire that, in a different way, has reached to modern times. 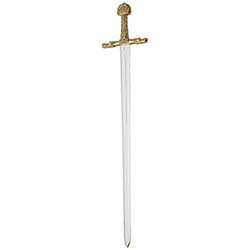 You're viewing: Emperor Charlemagne Sword by Marto of Toledo Spain $361.99
Rated 0 out of 5
Add to cart