Item # SFAG3602VS
The William Wallace Sword with Scabbrad by Art Gladius of Toledo Spain
Sir William Wallace, one of Scotland’s outstanding national heroes, had a price placed on his head by the English for killing one of their own. Refusing to accept the treaty signed by the Scottish nobles in 1297 by which Scotland submitted to English rule. William Wallace captured several fortresses and inflicted a severe defeat on the English forces in September of 1297, after which he was proclaimed Regent. In 1298 King Edward I invaded Scotland and defeated Wallace’s army, forcing him to flee to France. When Wallace later returned to his native Scotland, he was captured, tried for treason and executed.They can take away our lives, but they will never rob us of our Freedom. In 1314, Scottish patriots, starving and outnumbered, attacked the fields of Bannockburn. They fought like warrior poets. They fought like Scots. And they won their freedom forever. 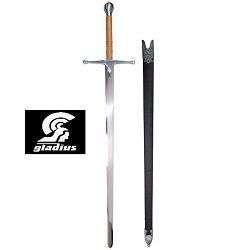 You're viewing: William Wallace Sword with Scabbrad by Art Gladius of Toledo Spain $149.99
Rated 0 out of 5
Add to cart