The King Solomon Sword by Marto of Toledo Spain

King Solomon was the second son of Uria’s wife , Betsabe , whom his father, King David , had married after orchestrating his death.
King Solomon reigned in Israel between 970 and 931 B.C. and was known and respected as a wise , fair and powerful king. King Solomon raised the Israelite monarchy to the maximum grade of prosperity. King Solomon built the Jerusalem Temple , and a wall around the city as well as cultivated the sciences and the arts.
It is told in history that there was a case in which two women were fighting for a child and King Solomon , in order to find out which one was telling the truth , gave his sword to a soldier and ordered him to split the baby in two , giving one half to each of the women. The real mother begged the king not to kill the child and to give him to the other woman. In this way , King Solomon knew immediately which one was lying , showing great wisdom and fairness.

The Sword of King Solomon pays tribute to this biblical kings’s great spirituality and wisdom. The 47-inch sword has a 24-karat gold plated hilt , handle and pommel that are wrapped in fine leather and accented with silver plated medallions. The images on the sword include the Star of David and the Ark of the Covenant. The tempered stainless steel blade also has gold etched imagery that makes this piece a precious display of faith and heritage. 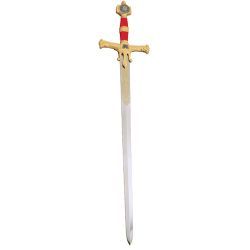